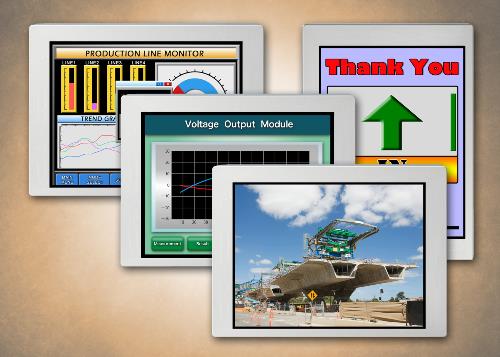 The six new LCDs are NLT’s next generation 5.7-inch displays and feature a built-in LED driver board, wide operating temperature range (-30 to +80 Celsius), high contrast ratio of 900:1, and excellent display performance in various environments where industrial equipment is used. The new products are interchangeable as they have the same module outline and the same mounting hole positions. Five of the new displays have CMOS interfaces, while one of the VGA offerings has an LVDS interface.

5.7-inch VGA models
The four 5.7-inch VGA modules are resistant to vibrations up to 6.8 G, making them ideal for applications prone to strong shock and vibration such as construction and marine equipment. Included in the new 5.7-inch VGA lineup are LVDS and CMOS interface models, standard brightness and high brightness models, and a portrait view compatible model.

Mass production of all six of the new 5.7-inch displays began in August 2016.